The story of Monsieur and Madame Liet

For over thirty years, from the beginning of the 1880s until the First World War, the north-eastern corner of Hampton and Dendy Streets, Brighton was a little corner of France. Amidst a large and rather wild garden stood a modest wooden cottage, with rambling extensions in several directions bearing the name of ‘Charente’, the department of France from which its owners came.

The traditions of French provincial family life were maintained within the cottage’s walls, and amongst the native flora of the garden were carefully planted reminders of ‘home’, including some vines – a pale reflection of the famous vineyards of the Charente, the home of French cognacs. But Charente was not just an island of French culture in a sea of British colonialism; it was also a sort of powerhouse for the transmission of French culture to surrounding Melbourne. Its owners, Monsieur Augustin Liet and his wife Augustine, were amongst the best known of Melbourne’s teachers of French, teaching at a large number of Melbourne’s schools for periods often long enough to initiate more than one generation of many families into the mysteries of the French language. Moreover, as one friend and associate of Madame Liet was to recall years later, their Brighton home was “always open to their friends, and many people will remember the jolly Sundays spent there.”

Augustin Liet arrived in Melbourne from France in September 1871, at the age of thirty-one. He had been born in 1840 in the commune of Guimps, near Barbezieux, in the Charente, where his father had charge of the communal school. After an education at the Petit Seminaire de Richemont and the Lycee Imperial of Angouleme, the young Augustin was prepared to follow in his father’s footsteps. In 1859 he received his Brevet de Capacite as a teacher from the Academie de Poitiers, (Université de France), topping the list of successful candidates from his department, and was sent to assist his father at Guimps. In the following year he went as Instituteur communal to Montchaude, also in the canton of Barbezieux, where he was to remain until his emigration to Australia. 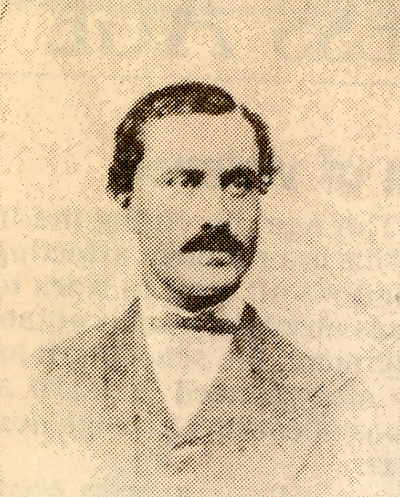 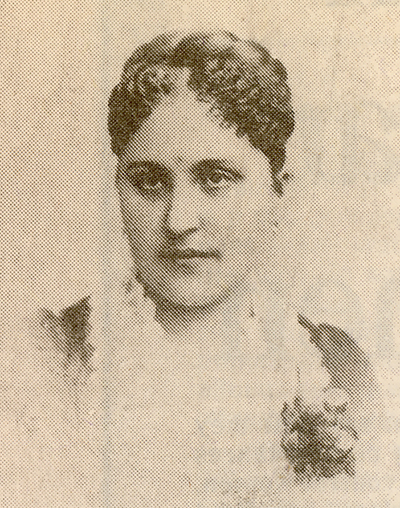 Why, when his career was thus set in a time honoured family pattern, did this young Frenchman decide, at the age of thirty-one, to forsake all that was familiar and come to – of all places – the British colony of Victoria in Australia? His family lived and died in an area of a few square miles centering on Barbezieux or Rochefort for generations. Moreover, as he himself records, “In France, and above all in our department of the Charente, an emigration is something almost phenomenal, and especially an emigration to Australia”, a point borne out in an amusing way by a testimonial letter written for him on his departure by the parish priest of Guimps, commending his dear parishioner to the “Apostolic zeal of the missionaries of Westphalia.” (‘Westphalie’ and ‘Australie’ apparently being all one to the good curé.)

The solution to this mystery and other problems are to be found in the 960 page manuscript journal in which Augustin Liet recorded his reasons for emigration, his experiences on his voyage, the impressions which the youthful colony made on his Gallic soul and much of the detail of the trials and tribulations of his first years here. The reasons for Liet’s departure from France seem rather clearer than his reasons for selecting Australia as his destination. The rewards given by the French State to a life devoted to teaching were extremely meagre. Moreover, his tranquil attachment to the familiar Charentais life had been shattered by the death of his first wife in 1865. Nor was the sorry condition of his beloved France in the period of the Franco-Prussian War and the Paris Commune of any comfort. Undoubtedly some of the folklore of the miraculous fortunes to be made in the golden colonies of Australia had penetrated as far as Charente and he resolved to try his luck there too.

On 14th June 1871, Augustin Liet left French soil. He went to London and on the 28th June embarked for Melbourne aboard the clipper ship, Hydaspes. She was of 2093 tons register and proudly billed as one of the fastest vessels afloat, having made the last passage to Port Phillip, ‘land to land’, in sixty-eight days. His own passage, however, was not so smooth, and it was only after a crossing of ninety-four days that he, at long last disembarked at Sandridge on 29th September 1871. 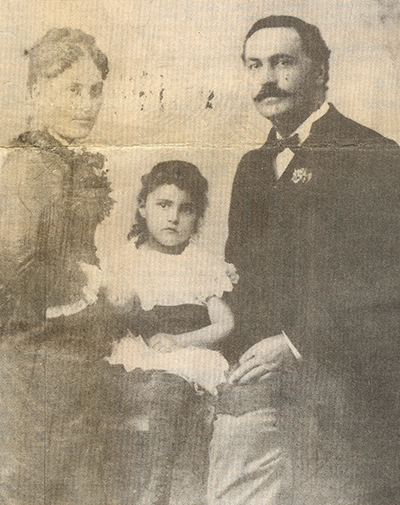 His first reaction to Melbourne was stupefaction. What few books he had managed to read about Australia had not prepared him for a well-established city which, after a life of a mere thirty-five years, could in many respects rival the larger provincial cities of France or even, in some particulars, Paris or London themselves.

Unfortunately, it was this very development of the colonial metropolis which was to frustrate the realisation of his ingenuous plans to make a quick fortune and return home. Melbourne was no longer a place of such eagerly won fortunes. Considerable resources of capital, influential friends, a certain ruthlessness and a perfect familiarity with the conditions and language of the colony were becoming increasingly necessary for success. Augustin Liet was certainly fortunate in his friends in the colony but was not well provided with the other ingredients for success. The next seven years were to be years of acute loneliness, frustration and disillusionment.

Augustin could find little outlet for his talents in the teaching of French in the early 1870s. Commerce in brandies imported from his native Charente was the principal expedient on which he placed his hopes, but the business conditions of the colony were generally unfavourable to such an enterprise, although capital provided by the then French Consul-General did enable him to establish an importing business which seems to have endured from July 1872 until 1875 or 1876. In 1872–1873, his commercial activities even took him for a brief period as far as Noumea in New Caledonia.

A third hoped-for avenue to success, as manager of a vineyard, proved impossible. He even tried the romantic expedient of gold-seeking, spending a brief and totally unsuccessful period on the goldfields of the Beechworth district. By March 1873 he settled down to the hum-drum existence as Secretary to the French Consulate in Melbourne, a post which he held for five years, including a period as acting Chancellor of the Sydney Consulate. He continued his modest commercial activities as a side-line.

With the dulling of his hopes of spectacular success went the dulling of his hopes to return to his beloved France. In 1878 he was compensated for this when part of the France he loved came to him. Throughout his years of loneliness and disappointment he had been sustained by the memory of a young girl of Charente, a remote cousin and his goddaughter whose first communion had been one of the last events of his life in France. On that occasion the young Augustine Saboureau had declared her intention to be his bride. She held fast to this intention through the rest of her schooling. As soon as she received her Brevet de Capacite as a teacher in 1875, she set about making plans for her trip to Australia. Finally, at the end of July 1878, the nineteen-year-old Augustine set out with her parents. On the 14th October of that year, this rather unusual and picturesque romance culminated in her marriage with Augustin Liet at St Patrick’s Cathedral in Melbourne. So began a partnership which was to prove so fruitful in the propagation of French culture in Melbourne.

After a brief period at Windsor, the household was set up at Brighton in the cottage with which we began, and the French language and literature became their primary concern.

Monsieur and Madame Liet taught French at many schools in the succeeding decades. At various times Monsieur Liet taught at Mr J. W. McCormick’s Kyneton Grammar School, Kyneton Technical School, Tintern, Nareeb, University High School and the Working Men’s College, the predecessor of the Royal Melbourne Institute of Technology. Madame Liet taught at the Church of England Girls’ Grammar School (Merton Hall), from its foundation for over thirty years. She taught at Ruyton for more than thirty-five years, Lauriston for its first twenty-five years, Toorak College and East Leigh. The couple also had a lecture room in the city for many years. 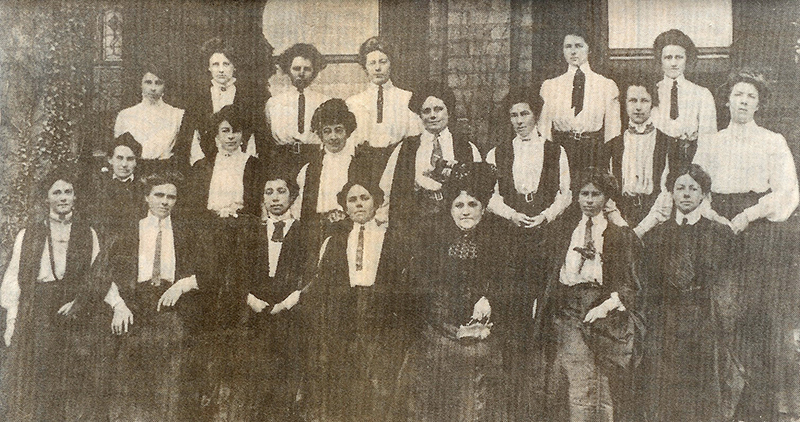 The Merton Hall staff, c. 1909. Madame Liet is in the front row, third from the left.

It is undoubtedly Madame Liet who is the better remembered of the two. She seems to have been possessed with inexhaustible drive and energy. Her husband’s activities became increasingly restricted as the consequence of injuries he received on the Brighton Express in the great Jolimont railway accident of August 1881. He died in 1911. Madame Liet survived him and was actively teaching almost until her death in 1925. She is still remembered by many of her former pupils with a mixture of love and terror. Miss Hilda Daniell of Ruyton wrote at the time of Madame Liet’s death, “…she came full of strenuous energy to her work, which in her eyes was perhaps the only work in the school which mattered. ‘Madame’s French’ had to be done no matter what happened, and to many girls, Wednesday, (Madame’s day at Royton), was a day of terror. It was only when they reached senior forms and came to know her better that terror gave way to love and that real friendship began…”

Nor was Madame Liet’s impact on Melbourne limited to the classroom. Through the papers of the 1880s and 1890s are scattered reports of her performance as a soprano at the French residents’ concerts in Melbourne, her lectures and soirées at the Austral Salon and the activities of the Cercle de littérature Francaise of the Australian Home Reading Union which she founded in 1895. There were also records of her activities locally in Brighton for assistance at the concerts in the Orderly Room in aid of the Fund for the Enlargement of St. Andrew’s School Buildings.

Fittingly, her indomitable energy in the propagation of the French culture was recognised by the French Government in 1912 which granted her the distinction of Officier d’Academie. After her death in 1925, the work of both herself and her husband was commemorated by the University of Melbourne which instituted two Liet Memorial prizes at the Matriculation examination in French.

Source: From notes in our file which were written by Rosalind Landells in 1966 and sent for approval to Ian Robertson, great-grandson of Augustine and Augustin Liet.