We were delighted yesterday to receive a visit from Ken and Judy Paynter, who with Tom McEvoy are working to preserve the Brighton family’s long history in Melbourne fashion. 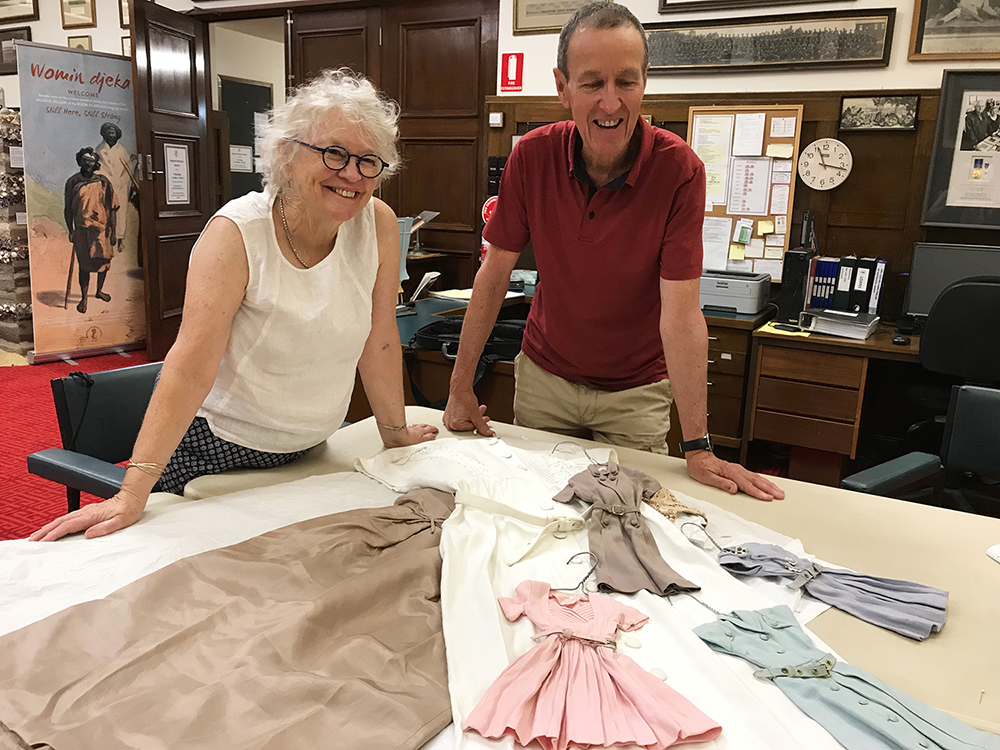 Judy and Ken Paynter with some of the treasures of their collection: four doll-sized replicas of Gala's most popular 1956 styles.Ken’s father Win Paynter met wife Nella on the beach in Brighton, just a stone’s throw from her family’s home in Cole Street. They were married in 1939 and had soon settled down in Cochrane Street to build a family of their own.

Win had started designing womenswear fresh out of school at the age of nineteen, launching his clothing company Gala Gowns in the late 1930s. Not only did Win have a strong eye for design, he was a talented businessman and innovator with an ability to read the market, identify what women were interested in and how to provide it at a reasonable price.

It was a nimbleness that enabled him to ride the seismic changes in Australian fashion during the 1950s and 60s, even as other old-school designers struggled against the tide. He moved away from silks to versatile, easy-care fabrics like Sundek and Travelon for everyday wear and had a knack for getting the right styles into stores at the right time.

As the mid-sixties brought on a fashion “youth-quake”, he tracked down former Norma Tullo designer Sandra McIntosh and gave her carte blanche to set the look for a new youth label, Emma, which was headed by son Rob Paynter.

In 1969, Ken married his high school sweetheart Judy, who grew up in Church Street. Judy has a fashion pedigree of her own: a journalist, she was fashion editor of Australian Fashion News and in 1972 cofounded the influential Ragtrader magazine with Fraser McEwing.

Ken and Rob continued to build on Gala’s successes throughout the seventies and early eighties, moving into imports, securing popular labels like Louis Féraud, Marshall Lester and Fiorucci. It was a rollercoaster journey, Ken recalls, and the stress could be immense.

Though Gala closed its doors in the eighties, both brothers continued in the industry, with Rob founding Rob Paynter Knitwear and Ken and Judy going into fashion marketing with their company IFM. Today, their wealth of stories and knowledge of the industry’s history sheds valuable light on the evolution of Melbourne fashion and society from the forties to the present day.

We would like to thank Ken and Judy Paynter for their passion and generosity in sharing their wonderful stories and personal collections with us, and Tom McEvoy for his kind facilitation and endless knowledge and enthusiasm.