The Ruddle drapery business was a prominent part of Bay Street, on the north west corner of Cochrane Street, from 1861 into the twentieth century. 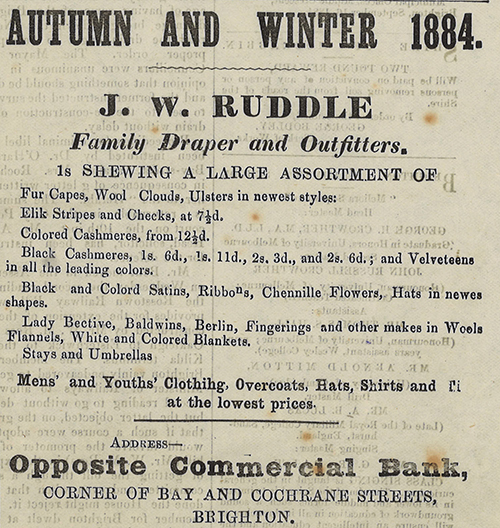 Advertisement for Ruddles Drapery, Brighton Southern Cross, 4 October 1884The business was founded in 1861 by James Williams Ruddle, who had arrived in Victoria in August 1859 on the sailing ship Key Stone, aged 31. James Williams Ruddle married Margaret Mitchell in 1861.

This advertisement (left) from the Brighton Southern Cross of 4 October 1884 shows the large range of items stocked by the business, including "Fur Capes, Wool Clouds, Ulsters in newest styles", "Hats in newest shapes", "Stays and Umbrellas" and "Men's and Youths' clothing, Overcoats, Hats [and] Shirts".

James Ruddle died in 1893 and the drapery business was carried on by his wife Margaret and two of his children, Alice and Frank.

This photograph (right) from the Brighton Historical Society photographic collection shows the drapery store decorated for the Queen Victoria Diamond Jubilee of 1897. In the doorway of the store from left to right are Alice Ruddle, Frank Ruddle and their mother Margaret Ruddle. The identity of the local children is unknown. The photographer was R.M. Geehan, Carpenter Street, North Brighton.

Two interesting descriptions of the store appear in early issues of the Brighton Historical Society Newsletter.

Ruddles Drapery, 1897Kathleen Kane recalled, "On the north west corner of Cochrane and Bay Streets, stood Ruddle's little drapery shop - almost sunken into the ground with old age, Miss Alice Ruddle and her brother were great friends of mine. He was a Boer War veteran... I also met Mrs Ruddle, their mother and founder of the store many times. In the early twenties she was in her eighties, and described to me how she had seen a gathering of aborigines on the opposite corner when she was a young woman.

"Ruddle's shop had old wooden shutters which Frank carefully put up each night. I could draw a plan where the tape and ribbons were kept - and the 'Menswear', presided over by Mr Ruddle himself - naturally."

Another description was provided by Mr G. Dockendorf who had the business opposite: "I forget the exact year in which the Ruddle's left and the shop was demolished ... It was probably in the mid thirties. The building, which fronted Bay Street, was a rambling structure. The family lived behind it (on the Cochrane Street side)..."

Dorothy Abry also had memories of the shop. "I remember being sent to Ruddle's as a little girl for cotton, pins and haberdashery lines. Mr Frank was most often in the shop. If you wanted something not at the counter where he was serving he would say loftily, 'Next Department down, please'. Then Miss Ruddle would hasten into the shop to serve you. Even to a small girl it all seemed vaguely funny and theatrical as the shop was so tiny. However it had been an institution, even in my mother's girlhood."